Database consists of 4 main parts: Every table, field and entity has unique id (based on Guid generation) and name (table and field has unique name, 32 char max)

Database works just like Unity does- it reverts all runtime changes. So it basically represent the world at the beginning of the game. You can save/load runtime changes with save/load add-on.

You can edit database data in external tools (Excel/GoogleSheets). Use json export/import to create database backup.

Data binder components let you inject values from database to Unity's components (including your own ones, inherited from MonoBehaviour).

Accessing the database at runtime

Let's take a closer look at these methods.

Here is minimalistic example about how you can access database without code generation:

As you can see, using generated classes removes all boilerplate code and also adds compile time check in case the database structure is changed. E.g. for example, if you remove field myField or change it's name and regenerate the classes- you'll get compile-time errors, that myField property is not found.

You can easily hook up any GameObject to a database row by adding BGEntityGo component to it. Just add the component, select table (meta) and then select a row (entity) After that all fields will be immediately available for reading and writing. 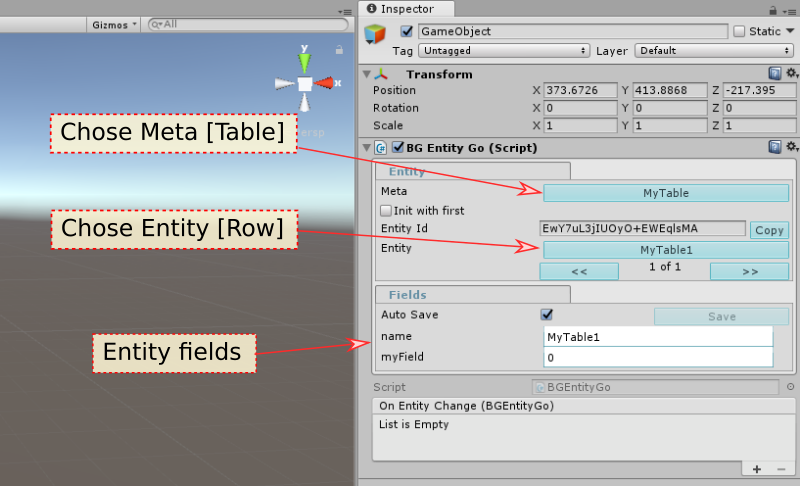 However in this scenario you'll have to use basic API, which has a lot of boilerplate code.

So, instead of this method, we highly recommend to use method 4, described below.

4) Instead of using BGEntityGo component, use generated classes (recommended)

Apart from CodeGeneration, described in method 2, there is another type of CodeGeneration, which generates classes, inherited from Unity's MonoBehaviour class. These classes can be added to Unity's GameObject, just like BGEntityGo component, but all of them have additional properties for each table field, so you can use them instead of basic API. We highly recommend to use this method instead of method 3.