There are 3 distinctive modular layers, each on top of the others. Lower layers are not aware of the layers above them (this also imply code dependencies).
1) Spline core (spline itself with points and fields). Mostly data only.
2) Two math implementations (Uniform and Adaptive) on top of the core.
3) Curve's components (Cc)- set of classes, adding some additional functions to spline, like moving an object along etc.

Note: the core itself is not customizable, however you can customize any other layer.For example, you can implement your own math implementation or add your own components. 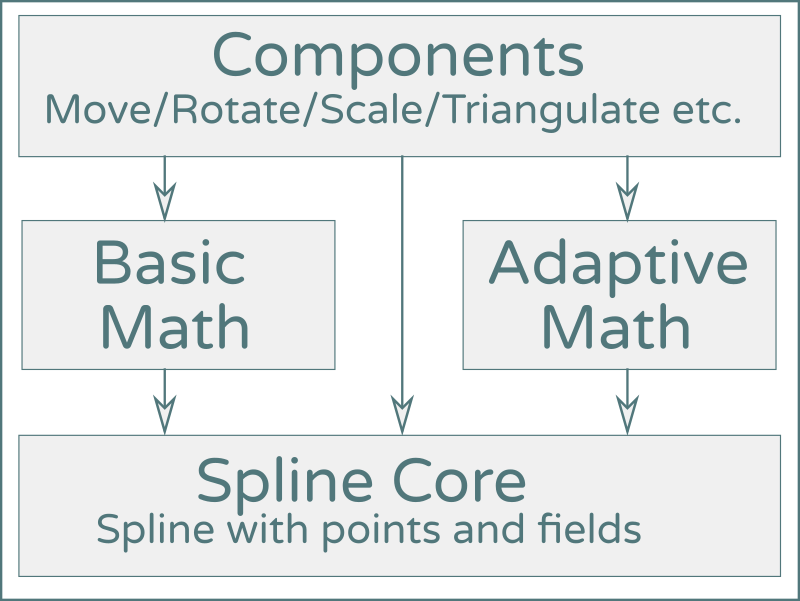 Components are the standard Unity MonoBehaviour subclasses, which gives you access to some additional spline's related functions at Play mode without any scripting. We recommend to use them unless they do not cover your needs. For example, if you need math, do not create BGCurveBaseMath yourself, simply attach BGCcMath component and reference it instead of BGCurve.

Custom fields are additional fields, that can be attached to every point. There is a set of supported types, that can be used as type of custom field, but you can attach any type (even if it's not supported) by using Unity's standard Component type and assigning your MonoBehaviour's derived object to it.

BGCurve.Changed event is fired once per frame in Update (or LateUpdate (configurable)) spline's method if spline is changed. Math uses this event to update it's cached data. if you need to update some data after math is changed, use math.Changed event instead of curve.Changed. Or alternatively use BGCcMath component, which has Unity standard persistent event (mathChanged) as well as non persistent one.